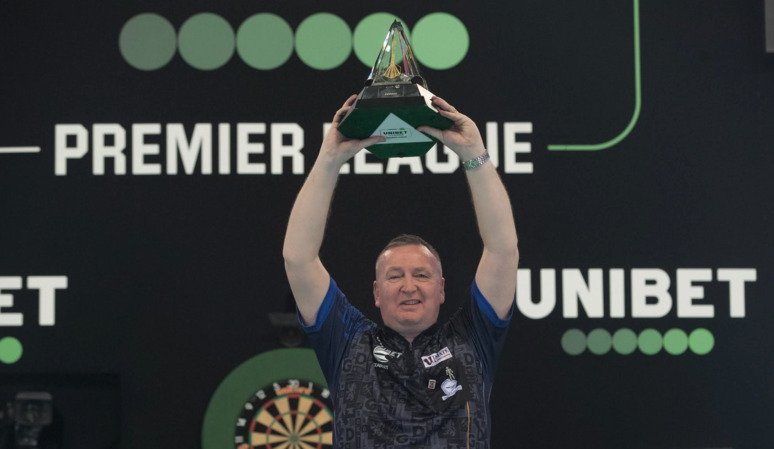 The first nine nights of the 2021 Unibet Premier League season will be held behind closed doors in Milton Keynes in April as ten players begin the battle to claim the prestigious title.

The Unibet Premier League traditionally visits the biggest arenas in the UK as well as travelling to Dublin, Rotterdam and Berlin during a 17-night tour across a four-month season.

However, due to the ongoing coronavirus pandemic and associated restrictions, the PDC will stage opening phase of this year’s event behind closed doors at the Marshall Arena in Milton Keynes.

The first half of the season will see the ten players face each other once across nine nights from April 5-9 and April 19-22, before the bottom two players in the league table are eliminated following Judgement Night.

A further seven league nights will then be held as the remaining eight players bid to claim spots in the Play-Offs, which will see the semi-finals and final held to determine the 2021 champion, with a decision regarding dates and venues to be made in due course.

The PDC are also able to confirm the dates and venues for the 2022 Premier League season, which is scheduled to begin on Thursday February 3 and will retain the 17 venues originally planned for the 2021 season.

Fans who have a ticket booking for any of the previously planned 2020 or 2021 Unibet Premier League nights that are not staged will have this booking automatically transferred to the 2022 event at the same venue (dates below), or they can obtain a refund (or voucher for tickets purchased in Berlin) from the Box Office where they made the purchase.

“With ongoing restrictions in the UK and Europe meaning that starting the 2021 Unibet Premier League season with crowds in April will not be possible, our ten superstars of our sport will begin the tournament behind closed doors,” said PDC chairman Barry Hearn.

“The Unibet Premier League holds a special place in the hearts of darts fans across Europe and we’ll continue to work with our venue partners to be able to stage the second half of the season with live crowds if possible.

“Being able to confirm our 2022 dates will also allow fans with tickets for events which have been postponed to plan their night for next year or make alternative arrangements for their ticket booking.

“With the start of the 2021 Unibet Premier League in sight, we’re still working hard with our sponsors Unibet and host broadcast partner Sky Sports to create a memorable, if unique, season.”

Glen Durrant is the reigning Unibet Premier League champion following his 2020 success, as he topped the league table at the end of his debut campaign before defeating Nathan Aspinall in October’s final.

Fixtures for the opening nine nights of the 2021 Unibet Premier League season will be confirmed in due course.

Ticket information for the 2022 Premier League will be confirmed in due course.

Tickets for 2020 or 2021 events which were postponed will be moved to the new date at the same venue in 2022, or will be eligible for a refund from the Box Office where purchased (or a voucher for Berlin tickets).