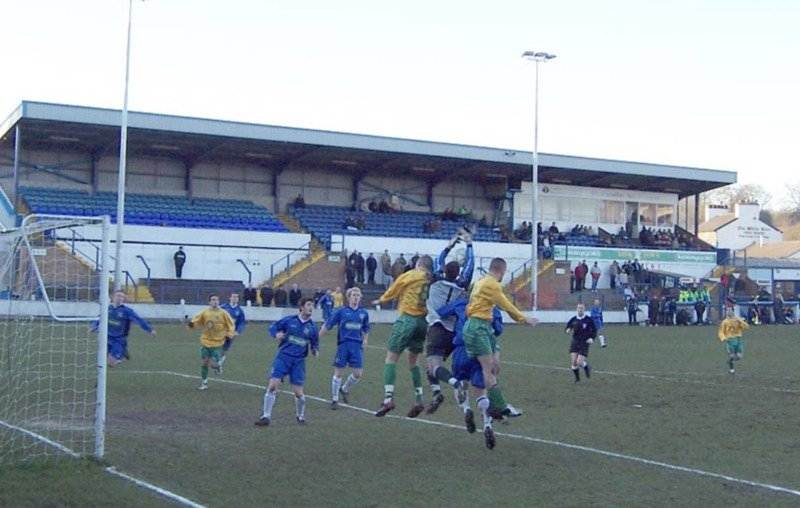 I’ve lived in Crosby since 1974 but never really been a massive Marine fan. However, I did attend possibly the most famous match played at the Rossett Park stadium, well before the Third Round FA Cup tie against Tottenham on the tiny ground.

In October 1978, Marine hosted Zambia in a semi-professional international. It is the only time in the history of the Merseyside club that dates back to 1894 that they have faced a national team. The wonders of the FA Cup mean the Mariners will now play a Premier League club for the first time.

If memory serves me right, Zambia played several matches against non-league opposition in England in preparation for trying to qualify for the 1982 World Cup in Spain. However, they failed in that mission and Zambia have never appeared at a World Cup.

I recall a cold night and the visiting players wore stockings and gloves. Crosby is one dimensional by race and I’d never seen anyone from Africa in the flesh but that added to the mystique.

Marine won the match 3-1 but there was very little to choose between the teams in terms of overall effectiveness.  The locals took Zambia to their hearts because of their spirit so far from home.

Zambia had the edge for natural ability, speed of body and mind and talent. However, the Marine players were stronger and physically bigger. I remember a close match, in the balance until late in the second half. There was great joy in the crowd and amongst the players when Zambia scored their consolation goal, at 2-0 for the home team I think if my recollections are correct.

For some reason, Marine always had a home match on Tuesday nights.  They were involved in a league and played in various national and regional Cup competitions. The club is a member of the Liverpool County and Lancashire County Football Associations and play in the Northern Premier League Division One North West.

The Zambia match comes to mind because of the Tottenham tie and the visit of the Special One and the top scorer at the last World Cup. It would be strange if Jose Mourinho took Harry Kane to the nearby Edinburgh pub before the Cup tie for two pints of lager and a packet of crisps.

If Kane does travel he will not be the first England international to appear at Rossett Park. In October 2018, Marine lost to Salford City on their own pitch in the fourth qualifying round of the FA Cup. Salford are owned by the Manchester United Class of 92 some of whom attended the match. Jamie Carragher lives in Crosby and he sponsors Marine for the Tottenham match.

Get lost to the village

It was a tradition at Marine to open the gates at half-time for fans who had had enough. However, the Zambia match was so different and intriguing that on this occasion more fans got in for free for the second half than left the ground in disgust. The pork pies at half-time are the best in England and that could explain the influx of spectators during the interval.

However, there was one potential incident during the Zambia match that could happen again when Spurs are in town. The centre of Crosby is known as the village and if you are having a bad game for Marine some wag in the crowd will tell you “get lost to the village”.

Another unusual fact about the club is that Kenny Dalglish’s window cleaner was the manager for 33 years and was in charge for the Zambia match. In fact, Roly Howard is the longest serving manager in English football history since the end of the Second World War. The visit of Zambia to Crosby was one of Howard’s 1,975 games managing Marine.

Dalglish is now a patron and another link with Liverpool Football Club is that former player, Jason McAteer, played for Marine. He played for the reserves against Bolton Wanderers  A team in 1992. McAteer was out of contract and Bolton bought him for £500 and a bag of footballs.

The Irish international played in two World Cups, in 1994 and 2002. He was a used substitute for the win over Italy in his first World Cup for the Republic of Ireland.

McAteer would have been seven on the night of the Zambia match so he may have got in for free at half time rather than pay the 25p for juniors before the start of the match.

The night the only team from Africa played at Rossett Park was during the Billy Morrey era. He was a Marine legend who joined the club after a row about boots with Liverpool. He could have been an Everton fan at the time because his nephew is Wayne Rooney. It’s difficult to discover who scored for Marine against Zambia but it could have been Uncle Billy.

The Marine ground is at the heart of a sporting Mecca. You can add the Zambia occasion to the championship golf courses on the north- west coast, including Royal Birkdale.

The beach in nearby Southport is where the great Red Rum was trained to win three Grand Nationals at Aintree Racecourse which is just a few miles from Crosby.

Anfield and Goodison Park are a 20 minute car journey away.

Jose Mourinho will do his research and may discover some links between Marine FC and the Premier League. However, taking on an international side must be rare event for a non-league club.

The David and Goliath Cup tie on 11th January brings back some memories of the night Marine played Zambia in Crosby, many moons ago

Leicester City worth backing on Asian Handicap against Chelsea Leicester City meet Chelsea at the King Power Stadium in the Premier League on Tuesday...