Who will win the Champions League?

With Arsenal and Paris Saint-Germain having already ensured that they will both progress to the last 16 of the competition going into this game, the issue now is to decide who wins the group and, in theory, gets an easier draw in the knock-out stage.

As things stand the teams are locked on 10-points apiece, but the onus is really on the Gunners to claim the victory here, with their final game away to Basel looking more testing than PSG’s last match at home to Ludogorets. 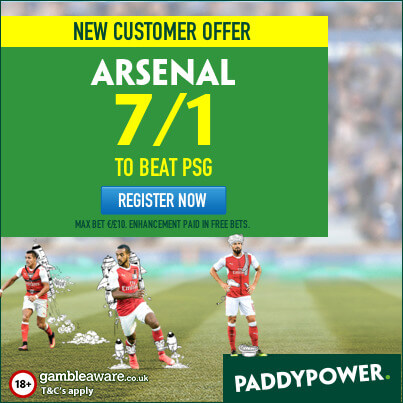 When the teams met at the Parc des Princes in the first round of the group stage, it finished honours even with a 1-1 draw, although Arsenal certainly rode their luck after falling behind to an Edinson Cavani goal in the opening minute.

Prior to their trip to Old Trafford Saturday lunchtime to face Manchester United in the Premier League, Arsenal were unbeaten in 16 matches in all competitions, with their only defeat of the season to date coming on the opening day of the Premier League when, with a makeshift central defence, they went down 4-3 at home to Liverpool.

PSG are not dominating Ligue 1 as they have in recent years and went into Saturday’s home game with Nantes lying third in the table, three points behind surprise early leaders Nice.

There are signs that they are gradually rediscovering their form under Unai Emery though, with 13 points from their last five league games and just a solitary goal conceded in that time.  They also face Arsenal after back-to-back wins against a decent Basel team in the Champions’ League, 3-0 at the Parc des Princes then 2-1 in Switzerland.  The latter victory was secured thanks to a wonder strike from defender Thomas Meunier in the final minute.

Not losing this game might take priority over winning it for both teams, so this might be a relatively cautious encounter.  A draw wouldn’t be disastrous for either team, as both would still believe they could top the group.  Backing Under 2.5 Goals could be the bet to go with in this one.