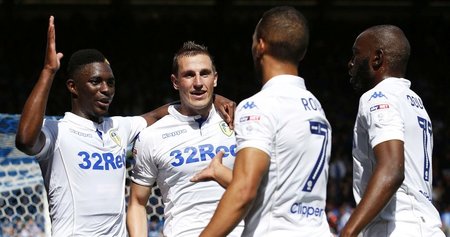 It’ll be a battle of two of the top seven sides in the English Championship this Friday evening, with Derby County travelling to Elland Road to take on Leeds United and hoping to complete the double over the side they defeated 1-0 at home in October.

Since that defeat, Leeds United have won nine of their 13 league matches and are in especially good form at home, where they have won their past four matches without conceding a single goal. That will obviously fill coach Gary Monk with confidence as he previews this Derby clash, as will the fact that his injury list is shrinking, with Charlie Taylor expected back from injury and with the knock Liam Cooper picked up in Monday’s FA Cup win over Cambridge expected to be a minor one.

As the home side and the team in slightly better form, Leeds United are predicted to win this one by the bookmakers, with Marathon Bet offering the best odds at a price of 7/4.

A Derby County victory isn’t that much further behind, with William Hill’s 19/10 odds, but the fact that the Rams have only won one of their past four league games will make many hesitate before tipping them.

The huge 3-0 defeat against Norwich last time out was especially disappointing for Derby and it won’t be any easier this week given the quality of the opposition.

If Leeds United do play well and do get on the scoresheet, then the man most likely to be rippling the net is Chris Wood, who has already conjured up 13 goals so far this season.

At 888Sport’s 37/19 odds, he is a man worth backing with an anytime goalscorer bet, while the highest rated Derby player is Darren Bent. Anyone predicting a fourth goal of the season for Bent will cash in if they tip NetBet’s 45/17 anytime goalscorer odds.

At the very least, Leeds United should come out of this match with a point. Their home form has been exceptional this campaign and the only team they’ve lost to in their past 10 league matches at Elland Road is Newcastle, a side far stronger than this Friday’s opponent.

Apart from that Newcastle defeat, Gary Monk’s men have won eight of the other nine matches, while drawing the other with Wigan, so a double chance bet for a home win or a draw looks to be a very safe one, while the 4/9 odds offered by the likes of Bet365, Boyle Sports and Ladbrokes are better value than you would expect for such an in-form and generally healthy team.