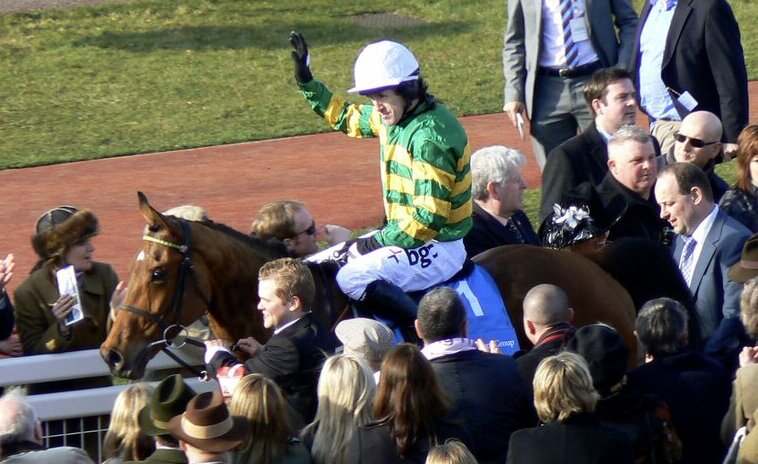 Hopefully you’re still in good shape after the Cheltenham Day 1 betting action. Here are Betfinder betting tips for Cheltenham Day 2, with picks for all 7 races of the Ladies Day starting as usual at 1.30pm.

Gaillard Du Mesnil appears on paper to be the best of the Willie Mullins-trained novices at this trip, a theory proved after his recent victory at the Dublin Racing Festival.

The Closutton-based handler has taken home the silverware for this event four times already since 2008 and his French-bred could well make it trophy number five. Trading at 10/1 before Dublin, Gaillard Du Mesnil is now a 10/3 poke with bet365* for the Wednesday opener.

Challow Novices’ Hurdle winner Bravemansgame has been a leading Ballymore Novices’ Hurdle pretender for some time now and Paul Nicholls’ ranks him as one of his best. He’s a best-priced 9/2 chance at bet365* if you fancy him.

Monkfish is now into odds on 5/6 with bet365* for the Festival Novices’ Chase after a more than impressive victory at the Dublin Festival.

Last season’s Albert Bartlett winner extended his record over fences to three from three and it will take a herculean effort by one of the others to overturn this Willie Mullins-trained good thing.

Of the others, Henry de Bromhead’s Eklat De Rire could be a dark horse for this race after he put in an impressive display at Naas to take their Business Club Novice Chase. At 14/1 bet365* he looks a decent each-way alternative to the favourite.

The Coral Cup is one of the trickiest handicaps of the week and even Mystic Meg would have trouble in trying to predict who is going to turn up, make the cut, or be the subject of a sustained gamble.

One horse that is almost nailed on to be in the field is the Dr Richard Newland-trained Benson (20/1 with bet365*). He set the season off by landing a four-timer including a Listed Hurdle at Sandown Park. Despite not enjoying the ground in the Betfair Exchange Hurdle at Ascot he grabbed an improbable fourth spot and can go well again here.

Chacun Pour Soi (10/11 William Hill) cruised to victory in the Dublin Chase pulling clear to win by eight lengths in the end and looks like taking the world of beating in the Champion Chase.

At this stage it looks like a case of who will chase him home? Prime candidates for that role are last year’s winner Politologue (9/1 with bet365*) and the Spanish-bred sensation Nube Negra.

Altior’s (8/1 with bet365*) best days look behind him while Put The Kettle On (14/1 with bet365*) well and truly boiled over behind the favourite Chacun Pour Soi the last time they met.

Many Cheltenham tipsters have Chacun Pour Soi down as their banker of the Festival.

The Cross Country Chase is a truly unique race and definitely one for the specialist performers.

Easysland (2/1 fav with bet365*), Tiger Roll (7/1 with bet365*)and Potters Corner (8/1 with bet365*) are all sure to have their supporters but the race can go to the lesser fancied David Cotton-trained runner, Amazing Comedy.

The veteran performer has been running in these types of event in his native France for years and odds of 16/1 with bet365* look good value.

Sky Pirate (8/1 with bet365*)stormed to the head of the ante-post betting after his victory at Warwick and is clearly in great heart. He’s a bit of a monkey though, making him quite a risky proposition for a serious Cheltenham bet.

Greanateen’s form behind Politologue in the Tingle Creek is very strong and he’s also a Haldon Gold Cup winner too which is no mean feat. Odds of 20/1 with bet365* look very attractive about him.

The Gigginstown-owned and Joseph O’Brien-trained Embittered (20/1 with bet365*) is also worth a cautionary look in the Cheltenham betting odds too.

All the life was sucked out of Kilcruit’s ante-post price for the Cheltenham Bumper when he sluiced up in the Dublin Festival bumper. Odds of 10/1 soon went for a burton and the best price for him now in the betting village is 13/8 with bet365*.

Kilcruit is the one they all have to beat on paper but if you are looking for an each-way longshot then give the Richard Spencer-trained Wonderwall the once over at 28/1 with bet365*. He’ll be largely ignored in the Bumper betting but has some solid Ascot form to bring to the table.

In a normal year why would lots of Guinness be drunk?

Who was the last horse to win the Ballymore Novices’ Hurdle and Champion Hurdle?

Faugheen won the novices’ race in 2014 and the Champion Hurdle the following year.

How many favourites have won the Novices’ Chase over the last 10 years?

Four outright favourites have obliged since 2011.

Why was Olympian’s win in the first Coral Cup in 1993 lucrative?

The horse won a £50,000 bonus for completing the Imperial Cup/Coral Cup double.

Which horses have won the Champion Chase more than once this century?

How many obstacles are jumped in the Cross Country Chase?

There are 32 variety of obstacles jumped over the three miles and six furlongs of the cross country chase including fences, hedges and banks.

Has Nicky Henderson ever won the two miles handicap chase named in his Dad’s honour?

Henderson junior trained Greenhope to win the race in 2006 and Bellvano in 2012.

Who is the leading trainer in the Champion Bumper?

* Cheltenham betting odds 2021 quoted were correct at the time of writing. All odds are subject to change.

Expires: 236D 23H 39M
New customers only, bet up to £20 on the Exchange and if your first bet loses, we’ll refund you £20 in Cash. Bet must be placed in first 7 days of account opening. T&Cs apply. Payment restrictions apply. T&Cs apply 18+ONLY |BeGambleAware/ Bet Responsibly. This is an advertisement.