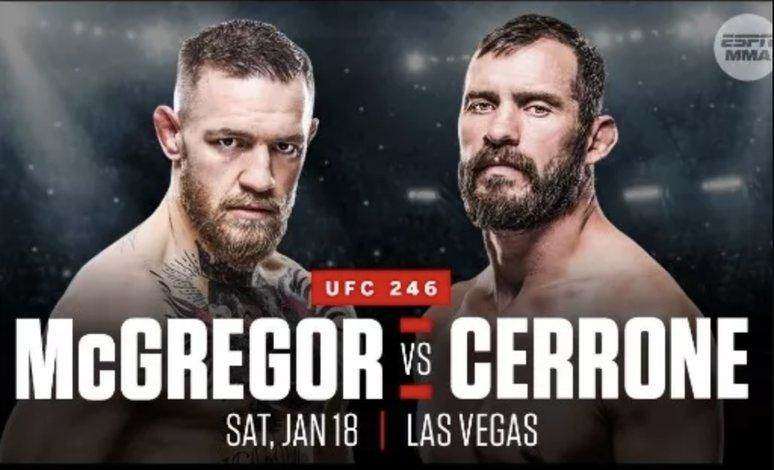 McGregor Vs Cerrone – The Return of the Notorious One

When Donald “Cowboy” Cerrone steps into the UFC octagon for the UFC 246 main event on Saturday 18th of January, it will be his 50th fight as a professional mixed martial artist.

In terms of experience, the ‘Cowboy’ has few equals. The ‘Notorious’ Conor McGregor will be the man standing across the cage from him, in a glorious Las Vegas main event to kick off 2020 in style!

Conor McGregor is a general 1/3 chance for his return to MMA, but Unibet are going out on a limb and offering very tempting odds of 11/25 (1.44) at the time of writing. Donald Cerrone is available to back at odds of 5/2 with most big firms, with slightly better odds of 13/5 (3.60) available over at Bet Victor.

As always with MMA and the UFC in particular, you never can trust the odds too much as anything can and does happen. However, Conor McGregor is certainly the favourite to win this one despite not having a UFC win since 2016.

Donald Cerrone: Off The UFC Record

The simple answer is Conor McGregor, but it’s not that simple. Donald Cerrone also has the most head kick victories, amongst the most submission victories in UFC history. He is as legit a martial artist as it comes. If McGregor is in any way under-cooked in his prep for this outing, Cowboy will punish him, especially at 170lb.

For McGregor, this is all about mindset. All of the social media content around the McGregor camp suggests that he is in the right mental place for this return to competitive action. He looks in outstanding physical shape and appears to be over his personal problems.

If he’s anywhere near his best, Cerrone will struggle to cope with McGregor’s accuracy with the left hand. McGregor will keep this fight at range and look to dominate air space in the stand-up position. Cerrone is not always the most mobile of targets and McGregor’s southpaw style will only make him easier to hit.

What would slow the pace down in Cerrone’s favour is if he made a fast start and landed a good early shot or two, gaining McGregor’s respect and slowing him down in the process. If McGregor is able to establish range early on, this could be a one-sided spectacle.

The 1/2 available with Ladbrokes may not last, but the price is worth taking if you can get it for the straight McGregor win. The value may lie in the alternative betting markets, such as “Round Betting”. Here, you will find interesting odds of 12/1 at William Hill about Conor McGregor winning the fight in Round 3.

In the first two rounds, McGregor will be trying to establish full composure and control over the pace and range of this fight. The first couple of rounds could even develop into a phoney war if Cerrone too plays the quiet game. With this in mind, the fight could begin to warm up in round three, when McGregor has registered the openings he feels are there and settled into the bout. If McGregor can start breaking down Cerrone by upping the forward pressure rate in this round, the fight could be over quickly.

Expires: 42D 05H 20M
New customers only, bet up to £20 on the Exchange and if your first bet loses, we’ll refund you £20 in Cash. Bet must be placed in first 7 days of account opening. T&Cs apply. Payment restrictions apply. T&Cs apply 18+ONLY |BeGambleAware/ Bet Responsibly. This is an advertisement.