Minding looks a good thing in the Nassau Stakes

The Qatar Nassau Stakes has seen a long and illustrious list of winners down the years, the likes of Russian Rhythm and Ouija Board spring to mind from recent years and who can forget the remarkable treble of wins by Sir Henry Cecil’s Midday from 2009-2011. This season, MINDING has been the star attraction in the fillies’ division and despite being a shade of odds-on to win on Saturday, she really does have a bomb proof look about her at the moment. 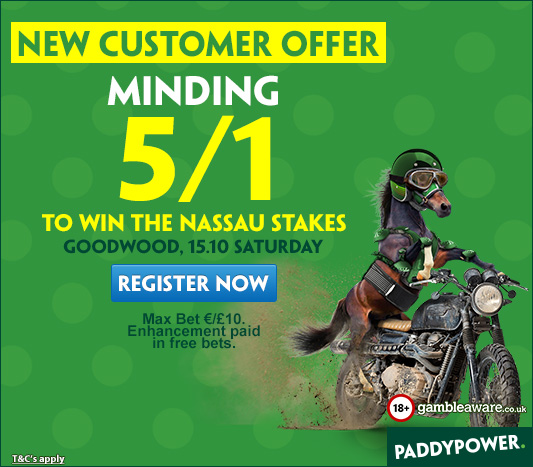 Since landing the 7f Moyglare Stud Stakes at the Curragh last season, this outstanding filly has won a further four Group 1 races, her only defeat coming in the Irish 1000 Guineas two starts back. That day, she banged her head in the starting stalls and that set her up for a flat run when beaten by Jet Setting. Next time out in the Investec Oaks at Epsom, she put that experience behind her with a brave and classy display, using all of her ability to negotiate a tough route through from the back to gun down her rivals in the closing stages. It was a confirmation of how good this daughter of Galileo is and reminded everyone that she is the best around.

Last time out in the Pretty Polly, Minding looked awesome despite going off at 1/5f. (see video below). Her turn of foot was breathtaking and she has no trouble at all in dismissing the challenges of some smart older mares. Effective over a mile and twelve furlongs equally, she produced the goods over ten furlongs here too, which lends itself to the Nassau Stakes over the same trip at Goodwood being right up her street. Stablemate Alice Springs is her chief market danger at the moment but it remains to be seen if she’ll run.

John Gosden’s Journey is also a credible threat on the best of her form, while several others would have some sort of claims to finishing in the first three or four. But to all intents and purposes, this appears to be another opportunity for racing fans to see a truly wonderful racehorse perform on the biggest stage. Her dam, Lillie Langtry, was top class too, a winner of the Coronation Stakes in her hay day. Between Galileo and Lillie Langtry, they’ve parented another superstar and at best odds of 8/13, she looks a good thing to produce the goods for favourite backers.