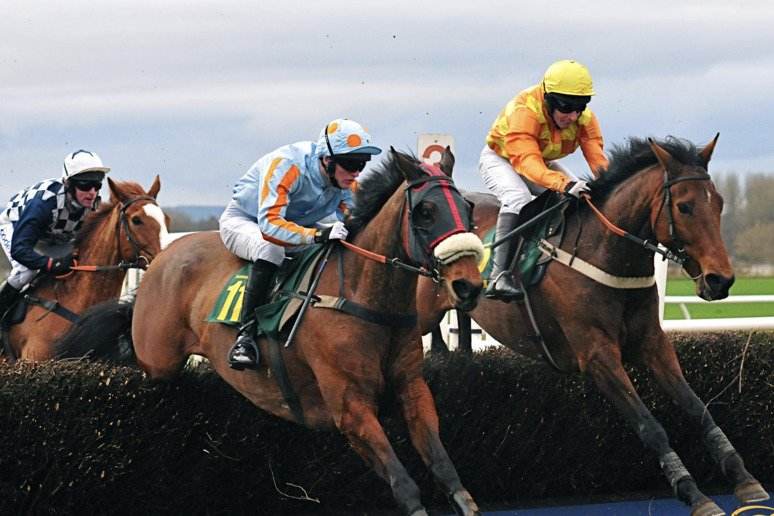 As far as staying handicap chases go, they don’t come any better than the Ladbrokes Trophy (formerly Hennessy Gold Cup) and punters will no doubt be itching to have a crack at the Newbury showpiece, due off at 3pm on Saturday. Here’s our big race preview and Ladbrokes Trophy Chase tips.

Well it’s a mighty competitive affair, as you’d expect, and a big field seems assured with 19 horses still standing their ground after Monday’s declaration stage. This is reflected in the Ladbrokes Trophy Chase betting odds – with most firms are going 7/1 the field at the time of writing.

Harriet Graham’s Aye Right will carry the hopes of the north when he heads to Newbury on Saturday for the Ladbrokes Trophy!

Plenty of incentive to find the winner then and Kim Bailey’s Vindication will be a popular tipsters pick following his fine comeback second behind Cyrname in Wetherby’s Charlie Hall Chase at the end of last month, and given the current form of the stable – 32 winners already this season, equalling last season’s tally, and a sweet Saturday double last weekend.

Considered “more or less certain” to line up, according to his trainer, Vindication will bid to carry near top weight of 11st 11lb to victory and if he’s truly a King George / Cheltenham Gold Cup horse, as his connections believe he is, that’s unlikely to prove a stopper.

However, the worry with Vindication is that, in spite of that Wetherby run and another solid effort at Cheltenham in March, he has done all his winning (he’s 7-11 under Rules) going right-handed. Despite not falling in seven chase starts, his jumping doesn’t always impress and he was far from fluent when schooling at the track last week.

⭐️ Vinndication (No.9), 8/1 with the sponsors for the @Ladbrokes Trophy works with Towton winner Newtide (No.10) over a series of fences at the track this morning @kimbaileyracing pic.twitter.com/83t1WtTNQy

That’s not to say he can’t win but, for betting purposes, his stablemate Two For Gold (12/1 with William Hill) is more interesting at a double-digit price, although any potential backers are advised to wait until he has been confirmed a definite runner (likely on Thursday), with connections also considering a crack at Newcastle’s Rehearsal Chase.

Also a seven-year-old with scope for further improvement, he has now won seven of his starts under Rules, including a Grade 2 novice at Warwick last term, and there was no disgrace in his subsequent second (albeit remote) behind Copperhead in the Reynoldstown at Ascot, where he has giving the winner 5lb.

He’ll meet that horse, who stopped quickly when pulling up on his seasonal reappearance last month, on much better terms should he take his chance at Newbury, and his comeback second over an inadequate trip will have put him spot on.

May be old news but good good news anyway for Two For Gold ante-post backers (at Newbury); https://t.co/9oHuE6r9Hm

Aye Right Gets The Nod

Two For Gold is a superb jumper who likes to race up with the pace, it’s not hard to see him giving backers a good run for their money, but the other horse for us to back is Charlie Hall third AYE RIGHT (8/1 with William Hill) , who was beaten just seven lengths by the winner.

That run was a career best and by some way and there was no fluke about it either, although the handicapper was less convinced in raising Harriet Graham’s pride and joy only 4lb to a mark of 150, meaning he will carry 11st, assuming top weight Ballyoptic makes the gig.

The bare form would suggest he’s run at least 5lb better than his revised mark, so he could be very well treated here. Furthermore a 7lb pull with Vindication gives him every chance of turning the tables, especially as Newbury should suit him better and considering there should be plenty of improvement to come this winter.

Aye Right must surely go close under regular pilot Callum Bewley and is much preferred to last year’s runner-up The Conditional, who is now 10lb higher and lacks a prep run, and Sam Brown, who seems best when the mud is flying (form figures of 11111P3 on soft or heavy) and whose connections will be hoping for more rain than is forecast.

Good ground on the other hand is pretty much essential to Paul Nicholls’ Secret Investor and he would have place claims if getting his conditions, although he’s shot up the weights (due to carry 11st 9lb) after winning the Badger Beer and any remaining each-way betting value surely lies with one of the bottom weights.

Alan King, who won this with Smad Place in 2015, provides a likely sort in POTTERMAN (20/1 with William Hill), who advertised his claims when finishing a narrow runner-up at Wincanton last time out, following another fine second at Chepstow.

That form doesn’t really compare to that of Aye Right, but the seven-year-old is clearly on an upward curve and appears best suited to a flat track like Newbury and decent ground. With just 10st 6lb on his back, he could easily fill one of the places.

Of the remainder, both Black Op and Kildisart are worthy of a mention based on the level of form they have shown, but neither have the look of horses with much in hand over the handicapper, unlike the main pick.

Deprecated: wp_make_content_images_responsive is deprecated since version 5.5.0! Use wp_filter_content_tags() instead. in /var/www/betfinder.co.uk/public/wp-includes/functions.php on line 4859

Deprecated: wp_make_content_images_responsive is deprecated since version 5.5.0! Use wp_filter_content_tags() instead. in /var/www/betfinder.co.uk/public/wp-includes/functions.php on line 4859

Leicester City worth backing on Asian Handicap against Chelsea Leicester City meet Chelsea at the King Power Stadium in the Premier League on Tuesday...