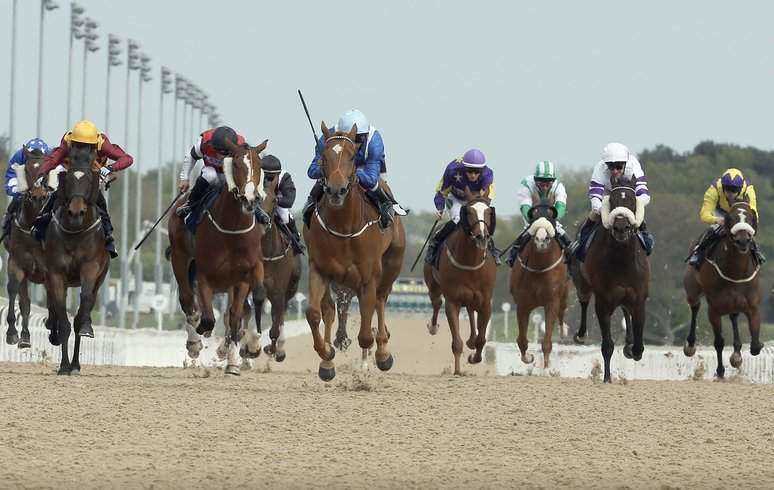 Like a child on Christmas Eve there won’t be a single horse racing enthusiast not looking forward to Monday 1st June and the recommencement of UK horse racing where a bumper ten-race card takes place on the all-weather surface at Newcastle.

While Covid-19 has curtailed the equine action for many weeks, the Monday card on the tapeta surface hopefully heralds in the beginnings of a return to some measure of normality for the sport with Royal Ascot just a couple of weeks away. Read on for our Newcastle horse racing betting tips…

Watch all the action live only on Sky Sports Racing pic.twitter.com/WoZT0h2Go2

Kicking off at 1.00pm there’s plenty for punters to look forward to on Newcastle’s Monday fixture as racing gets underway in earnest.

Mick Appleby’s all-weather debutants always command respect and STONE MASON, who will be the first of our Newcastle horse racing betting tips, can collect the opener having run better than his bare form figures suggest last term when trained by Roger Charlton.

His latest run came 300 days ago at Newbury where he finished seventh behind Richie Valens. That race is working out extremely well with plenty winners since coming out of the race and the Pivotal gelding could prove a tough nut to crack on his return if taking to this surface.

MUTASAAMY improved for the switch to handicapping when finding only one too good at Haydock back in July behind Mayfair Spirit and the Oasis Dream gelding got off the mark next time with a ready success over Stormbomber at Kempton when last sighted.

He was good value for his winning margin and there’s likely better to come from him despite being raised 8lbs by the handicapper. The form of that success has seen the runner-up, fourth, fifth and seventh horses all win since and with the potential for better to come he can double his win tally here.

BOND’S BOY looked useful when making a winning debut at Redcar last August and Richard Fahey’s charge stepped up on that effort when taking a significant rise in class next time out where he finished a good third in a valuable Newmarket contest.

The runner-up and fifth from that race have both gone on to score at Listed level so the form looks very solid and the Monsieur Bond gelding can find further improvement on his reappearance to take this prize which looks an easier contest than the one he took in when last seen in action.

Magical Journey sets the standard on his runner-up in Listed company latest, but ART POWER ran out an impressive winner over the minimum trip when last seen and the Dark Angel colt can continue to progress.

Third over course and distance on debut, Tim Easterby’s charge won easily when switched to turf at York last October, beating Minhaaj by five lengths. That runner-up has won since and also finished a similar distance behind Magical Journey at Newmarket as he did when beaten by the selection.

The pair look closely matched on that form but with the benefit of prior experience on this surface the Easterby runner edges the verdict to come out on top despite conceding 5lbs to his chief rival.

TATHMEEN has won three of his last five starts here albeit over the minimum trip; but the Exceed and Excel gelding found only the in-form Fizzy Feet too strong over this trip at Wolverhampton latest where Anthony Brittain’s charge didn’t get the best of runs late on.

His previous success saw him run out a ready winner over Young Tiger, scoring by almost three lengths and the third has won since. He’s placed off this mark in the past on turf when he was trained by Richard Hannon and the five-year old could still have scope so looks worth chancing to continue his good run of form at this venue with a return to winning ways.

It could be worth chancing OAKENSHIELD on his first outing following wind surgery and Karl Burke’s charge had hinted at ability in two starts on turf last September.

Both those runs came on softer ground, and he possibly found five furlongs too sharp when last seen finishing fifth at Hamilton. That race has thrown up a couple of winners and having since been gelded and undergone a wind operation he could appreciate a return to a longer trip having been denied little over one length over this distance on debut despite only finishing fourth.

A mark of 75 doesn’t look harsh on his return/handicap debut and he can make his presence felt under Andrea Atzeni.

BE PROUD bumped into a well-handicapped rival when last seen in January over an extra furlong, beaten almost three lengths behind Wasntexpectingthat; but Jim Goldie’s charge had won over course and distance the time before and the Roderic O’connor gelding could resume winning ways here.

That latest defeat came in a stronger race than this and he ran on well having looked outpaced to finish clear of the rest although he was no match for the winner. He is reunited with Danny Tudhope for this run – the pair combined for his last success – and he should be in the mix dropping back to the minimum distance from the same handicap mark.

Sir Michael Stoute has a 40% strike-rate at Newcastle and ALIGNAK can enhance the top trainer’s fine record at this venue.

The Sea The Moon colt has improved with every start, winning his latest run at Kempton where he readily saw off Noble Music by almost five lengths. The third horse from that race has won twice since, while his earlier third behind Trueshan at Ffos Las is working out extremely well.

He makes his handicap debut here from a mark of 89 which looks very fair and with the potential for improvement he ought to go well under Oisin Murphy who takes the reins on the four-year old.

Frankly Darling looked a potentially useful recruit when finding only one too good on debut and John Gosden’s filly is quoted in the betting for the Epsom Oaks. But THIBAAN (Nap) made a decent first fist of things when finishing fourth on his own debut at Kempton in November and the War Front colt can progress on that experience to do better.

Sir Michael Stoute’s charge was beaten around three lengths where he kept on at one pace having travelled quite well in the race. He looked as if he’d come on for the run however and he wasn’t given a hard time from the saddle.

The form of that debut effort looks fair and with this step up in trip a potential source of improvement it wouldn’t come as a surprise to see a bold bid forthcoming. He has to give 5lbs to John Gosden’s Oaks hopeful so he’ll need to be on top of his game, but he could well progress and thrive over middle distances this term so looks the pick of our Newcastle horse racing betting tips to upset the applecart here.

WISE GLORY was undone by inexperience on his Beverley debut last August, but he finished well late on to snatch third and the Muhaarar gelding ought to know more this time around.

Simon Crisford’s charge has seen both the winner and runner-up win races since and he is open to improvement now he’s had a run under his belt so better is expected.

Stamina for this longer trip however has to be taken on trust, but the additional distance shouldn’t pose too much concern on breeding and if building on his promising debut effort then he could go close and is the last of our Newcastle horse racing betting tips for Monday.

* Betting odds correct at the time of writing