Bournemouth face Manchester City for just the tenth time in history on Monday night. The Premier League clash pits one of the league’s leakiest defences against one of the most free scoring teams.

Here are our betting tips and predictions for the match. 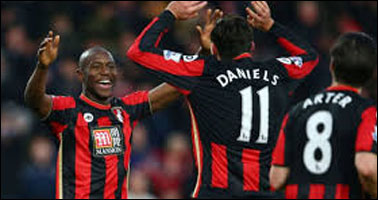 The Cherries have lost the last three head-to-heads with an aggregate score of 13-1. It was a complete demolition back in September, with Pep Guardiola’s men notching a more than comfortable 4-0 win. (see video below)

Eddie Howe’s side have won five of 12 matches at the Vitality Stadium. Over 2.5 goals has happened in 58% of their home fixtures.

City have won eight of 12 matches on their travels. Over 2.5 goals has happened in 83% of the matches.

Bournemouth will be without striker Callum Wilson, who’ll miss the rest of the season due to ligament damage in his right knee. Defender Charlie Daniels is still a doubt.

Pep possesses an almost fully-fit squad to choose from for the visit to Bournemouth. The only player missing is long-term absentee Ilkay Gundogan.

Bournemouth will have to re-write history if they’re to defeat Man City – the Cherries having never beaten the Sky Blues in competitive football. In their last three head-to-heads, the south-coast side haven’t just lost, but they’ve been destroyed by the Manchester club.

Howe’s side don’t go into the match in particularly good form either. They’ve won just two of their last 10 league matches, and are without a win in six. They showed good spirit to fight back against Everton last week, but crumbled defensively under pressure. They’ve been shipping goals of late, something which wasn’t addressed in the January transfer window.

City meanwhile have managed back-to-back wins, catapulting them back into the top three. They just about edged past Swansea last week, with Gabriel Jesus fast becoming a fan favourite with his instant impact. Much like the emergence of Marcus Rashford last season at Manchester United, the arrival and form of Jesus seems to have lifted Pep’s side.

It’s hard to look past an away win therefore, with Manchester City looking to kick on in the race for the title and top four. They’re odds-on favourite with all the bookies, but 888sport are offering the best odds at 23/50 for an away win.

Nevertheless, Howe is likely to have drilled his defence all week in preparation for City, so a better bet could be on Gabriel Jesus continuing his goalscoring form. Paddy Power are offering the Brazilian as an anytime scorer at 6/5.