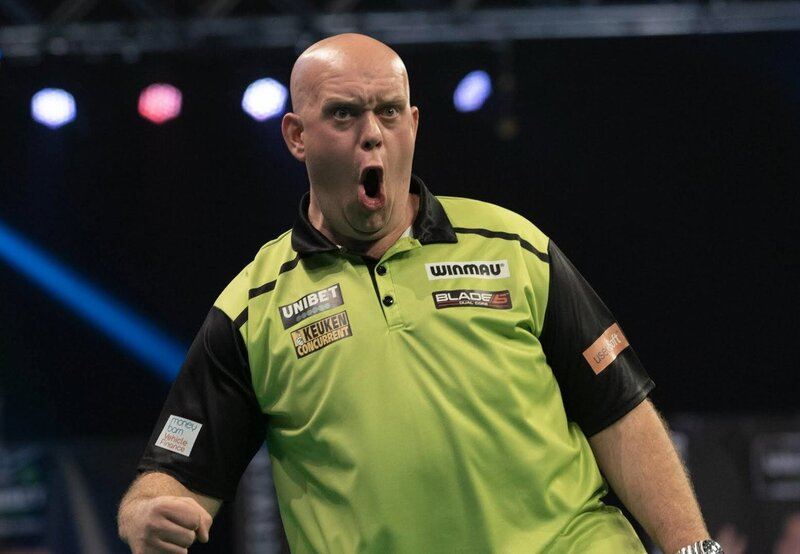 The Premier League Darts bandwagon rolls into First Direct Arena, Leeds on Thursday. Here’s our regular preview with the latest odds along with this week’s Premier League darts bets.

Michael van Gerwen still tops the Premier League Darts table but with Jonny Clayton taking his second nightly final a week ago, the Welshman is now level on points. Just a point behind the duo sits Peter Wright. These three players have contested more games than their rivals, 16 in total. This makes it easier to compare the stats of these ‘big three’.

With a 170 finish, Michael van Gerwen has the highest checkout. With a 98.99 three-dart average he is the highest-scoring player. Likewise, his 42% success rate on doubles is the best of his main rivals – and second only to Michael Smith.

Peter Wright does match van Gerwen with 44 recorded 180s albeit Joe Cullen tops the 180s table. He has hit 45 maximums from just 14 matches.

If Jonny Clayton can bring his form from last Thursday to Leeds, he will be a handful for anyone. On that night’s final, he truly dismantled James Wade in the nightly final with a 6-1 victory that saw him record a 111.2 average.

But it is a statement you can make every week. It is noteworthy that only Michael van Gerwen has backed up a nightly win with a second appearance in a final seven days later.

The Dutch player beat Peter Wright on Saturday in a Players Championship event in Barnsley. That suggests he is in form and facing Gary Anderson – the player currently sat at the foot of the league standings – in his opening match on Thursday, he is our best Premier League Darts pick for this week’s event.

Looking forward to this event in #Leeds next week watching @rockstar_13_ what a place to play ! #darts #pdc @ModusDarts180 pic.twitter.com/XAcwSyZKcZ

Why Back an Injured Under-Priced Price?

Tell anyone you are planning to back a darts player with a fractured throwing hand and you would expect the men in white coats to come and take you away. Nevertheless, the bookmakers have still made Gerwyn Price 4/7 to win his face-off with James Wade. It seems these darts odds are more in line with an in-form Gerwyn Price firing on all cylinders and playing at his best.

Price has not been playing at his best. He has lost four of his seven opening-round matches. Now, with a hand that is damaged, it is surely time to take him on.

Wade was a finalist last week. He got there with notable victories against van Gerwen and Joe Cullen. He’s never been a flashy scorer but he is tenacious and sits ahead of Thursday’s rival in the league standings. At odds of 6/4, under the circumstances, he cannot be a bad darts bet in the match win market.

Expires: 3004D 06H 46M
New customers only, bet up to £20 on the Exchange and if your first bet loses, we’ll refund you £20 in Cash. Bet must be placed in first 7 days of account opening. T&Cs apply. Payment restrictions apply. T&Cs apply 18+ONLY |BeGambleAware/ Bet Responsibly. This is an advertisement.