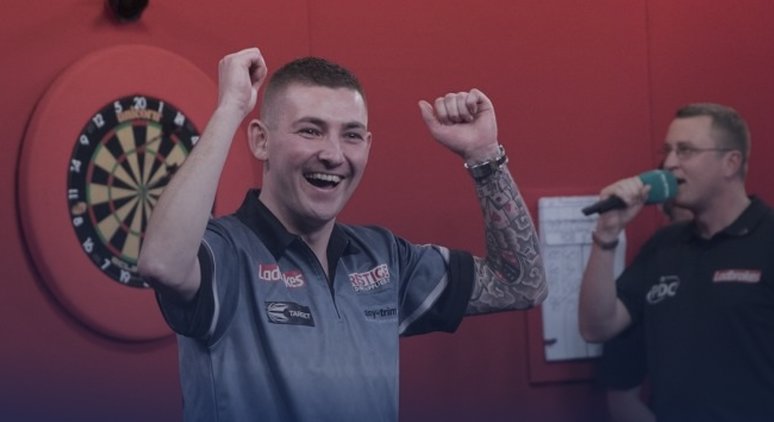 With no Player’s Championship Darts action at the weekend, last week’s Premier League Darts and the UK Open at the start of the March is the most recent and best form for us to go on when looking for a good Premier League Darts betting prediction for Thursday night’s Sky televised darts from the Motorpoint Arena in Nottingham…

A feature of this year’s Unibet Premier League Darts has been a guest player every week. So far none of them have won but three invited players have forced a draw including big John Henderson against Michael van Gerwen last week. 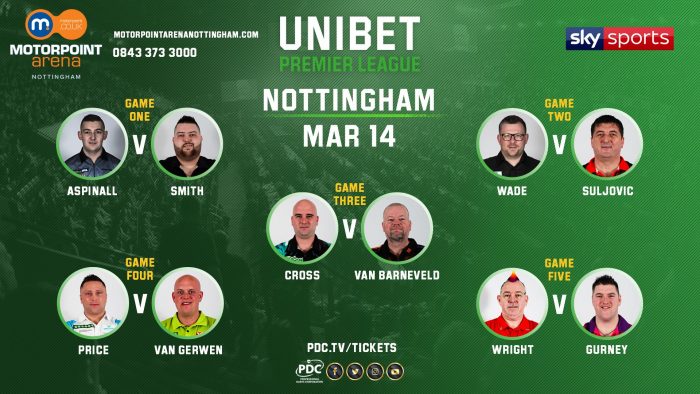 We think that sequence will come to an end this week with Nathan Aspinall strongly fancied to beat Michael Smith. Aspinall landed his first darting major when taking the UK Open on March 3rd and, in addition to playing some exceptional stuff, he must feel invincible right now.

That’s not the case with Michael Smith though. His form is in a trough and his only win of the new 2019 Premier League Darts season was over the ageing Raymond van Barneveld. A week ago Rob Cross truly dismantled Smith and until the World Championship runner-up shows some sparkle he should be swerved.

James Wade was simply stunning last week, averaging 109.6 and posting two 100+ checkouts in beating Daryl Gurney 7-0. Wade has the highest checkout percentage of any player in the 2019 PL Darts and also the highest 3-dart average which makes him hard to beat against anyone.

Mensur Suljovic has the task of taming him this week and it could be futile. The likeable Austrian has only won one of his 2019 Premier League games and his checkout percentage is a relatively poor 41.67 percent. On that evidence this should be a big win for James Wade here.

Rob Cross was back to his brilliant best when beating Michael Smith with some impressive figures last week and if he is half as good on Thursday he will surely account for Barneveld here. The Dutchman is winless in the league and also sits bottom of the table on three-dart averages.

‘Barney’ has conceded ten more legs than he has won which means, on average, he loses by two legs. We think he can outdo himself tonight with Rob Cross (sitting second in the Premier League table) inflicting a comprehensive defeat of 2.5 or more legs.

🎯 Former #premierleaguedarts champion Raymond van Barneveld says he “won’t give up” after his tough start to the year.

In drawing with John Henderson last week Michael van Gerwen was brilliant on occasion and useless on others. At one stage four consecutive visits to the board saw him score just 222 points and in another leg three visits yielded just 163 points.

Any such inconsistencies will see him lose to Gerwyn Price here as the Welshman is playing some extraordinary darts just now. Last week he hit two ton+ finishes and converted seven of nine doubles.

Daryl Gurney is playing badly and Peter Wright is both inconsistent and a ‘draw master’. While Wright looks the rightful favourite here, the draw looks massively over-priced at 33/10 and could be worth a small darts bet.

* Odds correct at time of writing

Expires: 9D 02H 50M
New customers only, bet up to £20 on the Exchange and if your first bet loses, we’ll refund you £20 in Cash. Bet must be placed in first 7 days of account opening. T&Cs apply. Payment restrictions apply. T&Cs apply 18+ONLY |BeGambleAware/ Bet Responsibly. This is an advertisement.