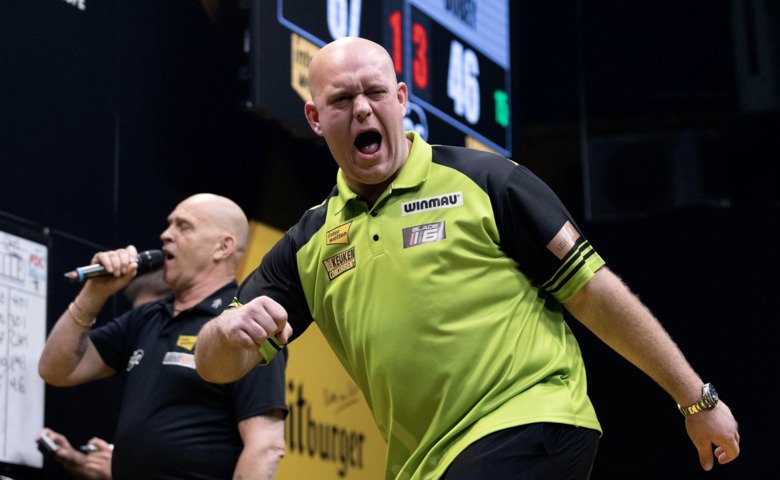 Here we preview Night 11 in Aberdeen and give you two Premier League Darts betting tips. James Wade was rewarded for his consistency when taking last week’s Premier League Darts fixture in Manchester. The form worth of his first-round victory over Gary Anderson does not amount to too much. And his second-round defeat of Gerwyn Price was head-scratching.

Gerwyn Price had played exceptionally well to defeat Peter Wright in the first-round – registering a 157 checkout along the way – but, as a heavy favourite, he was simply woeful against Wade averaging just 90 and always looking likely to lose. Nevertheless, with his usual tenacity and despite an outsider tag, Wade beavered away in the final to overcome Joe Cullen 6-5. His 66.7% checkout percentage was the decisive stat.

Elsewhere, Michael van Gerwen cannot be accused of losing any caste in defeat when beaten by the narrowest of margins by Jonny Clayton in the first round. He landed a 152 checkout – one of three ton-plus checkouts he produced – in a match where both players averaged 105-plus.

With all of this information placed in the central processing unit, Michael van Gerwen is a confident first-round selection this coming Thursday when the Cazoo Premier League Darts roadshow rolls into Aberdeen.

He plays Gerwyn Price who has become massively inconsistent and, with just six more Premier League fixtures to play ahead of the semi-finals, is unlikely to make the top-four cut-off point.

Michael van Gerwen has a massive +36 stat in the leg-difference column – meaning he has won 36 more legs throughout the competition than he has lost – Price is -6! Despite this, bookmakers such as Boylesports offer 5/6 about either player to win. For all intents and purposes, this looks a big mistake.

This Thursday, the @CazooUK Premier League comes to @PandJLive Aberdeen!

The atmosphere in ‘The Granite City’ is always electric.

Peter Wright Can Bite off Most Match 180’s

Earlier on the card Joe Cullen – who, with 92.4, has the lowest three-dart average of all Premier League Darts players – should struggle to contain Peter Wright. But there is little value in him in the match win market where 8/15 is the best price available.

7/5 about ‘Snakebite’ – who represents Scotland and has the advantage of playing in Scotland – taking the most match 180s is much more attractive. Joe Cullen produced three 180s in each of his three matches last week. Wright only played one game but he recorded five 180s.

Even on overall tournament 180 averages Cullen only just holds sway. He has recorded 55 in 18 matches. Wright has registered 52 in 19 matches. Technically he may be the underdog, but at odds of 13/8 with Betfair Sportsbook he’s an outrageously generous price.

* Premier League Darts tips odds correct at the time of publication. All odds are subject to changes.

Expires: 3004D 07H 28M
New customers only, bet up to £20 on the Exchange and if your first bet loses, we’ll refund you £20 in Cash. Bet must be placed in first 7 days of account opening. T&Cs apply. Payment restrictions apply. T&Cs apply 18+ONLY |BeGambleAware/ Bet Responsibly. This is an advertisement.