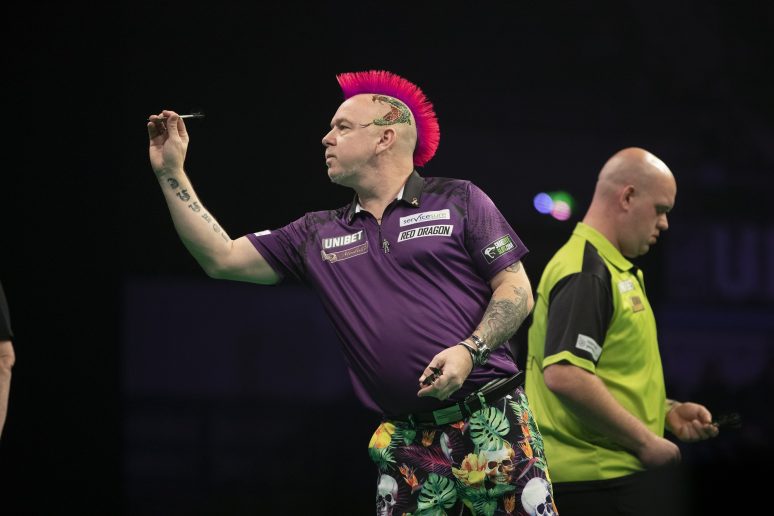 Peter Wright can get favourite backers off to a bright start in the opening match of Thursday’s Premier League card from the AO Arena in Manchester. The Scotsman sits third in the league standings with 18 points, just four adrift of leader Michael van Gerwen. Here we look the four opening quarter-finals and give Premier League Darts predictions on each.

Impressively, the Scotsman has won his opening game in all of the past four weeks. He is one of only three players to boast a positive leg difference, the others being Michael van Gerwen win and Johnny Clayton.

He can extend that sequence to five at the expense of Gerwyn Price who has been out of sorts in recent weeks. Almost a month has passed since he last won a Premier League Darts match and sat in sixth position on the league standings he is in danger of not qualifying for the semi-final stages of this competition.

“I thought ‘why not make the change?'”

Gerwyn Price has opted for a new walk-on song as he embarks on a Play-Off push in the second half of the Cazoo Premier League season.https://t.co/ol1SrUGUCY

Gary Anderson missed last week’s competition suffering from COVID. He has had a torrid Premier League Darts season so far with six first-round eliminations. How he won in six in Nottingham is a mystery! Despite that victory, he still sits eighth and last in the current Premier League Darts standings.

This week’s first-round opponent, James Wade may be without a nightly victory but he has made the last two finals and taken some big scalps. Even money seems an outrageous price in the win market, and so he too is a straightforward darts betting tip. All the evens is now gone but you can still get 9/10 on the Betfair exchange.

The 2022 @OfficialPDC Cazoo Premier League is in Manchester TONIGHT!

The third match on the card sees table toppers Michael van Gerwen and Johnny Clayton clash for the fourth time in this year’s league. The current scores are two-one in favour of the Dutch player. Successful last week in Leeds, he is expected to continue his golden spell.

But at 8/13 he represents little betting value in the win market. A better angle comes in the highest match checkout market. MVG’s highest checkout in winning last week’s nightly final was just 76 and he has only surpassed the 119.5-line once in his last six Premier League Darts games.

Cullen vs Smith: A Quick Kill?

Joe Cullen versus Michael Smith is a more difficult game to call. Smith’s renowned 180 scoring has abandoned him. Cullen has the worst checkout percentage of all players in the league.

It’s a hard one to call, but you sense the early pacesetter could gallop quickly clear in this one. So the last of our Premier League Darts predictions comes in the ‘Total Legs’ market where we are going low at a betting line of 9.5. In other words, either player to win by 6-3 or an even greater margin.

Expires: 3004D 08H 20M
New customers only, bet up to £20 on the Exchange and if your first bet loses, we’ll refund you £20 in Cash. Bet must be placed in first 7 days of account opening. T&Cs apply. Payment restrictions apply. T&Cs apply 18+ONLY |BeGambleAware/ Bet Responsibly. This is an advertisement.