We take you through our match preview and betting tips for the fixture at the Emirates Stadium in North London. 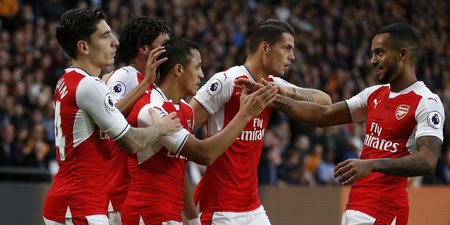 These two sides have only met four times competitively in their history, with all coming in the past two years since the Cherries promotion to the top flight in 2015.

Arsenal have won three of the meetings, including both clashes at the Emirates, but the last clash was a 3-3 draw at the Vitality Stadium in January.

Eddie Howe’s side blew a three-goal lead in that game, with Olivier Giroud netting a last minute leveler for the Gunners against ten men.

Both clashes in North London have been won by the home side by a two-goal margin: 2-0 and 3-1.

Will Arsenal bounce back with a win this weekend?

Only West Ham (10) have conceded more goals than Arsenal (8) so far in the Premier League.

Arsenal have won each of their last six home matches in the Premier League, securing four clean sheets in the process.

The Cherries have won only three of their last 22 away matches in the top flight, with only one (a 1-0 win at Sunderland) coming in 2017.

Alongside Crystal Palace and West Ham, Bournemouth have yet to pick up a point in their opening three league outings.

Calum Chambers (thigh) is a doubt for the hosts, while long-term absentee Santi Cazorla (plantaris) is still unavailable for Arsene Wenger’s side.

The visitors will be without Simon Francis (hamstring), Callum Wilson (ACL knee) and Junior Stanislas (groin), although Nathan Ake (ankle) may be fit in time.

Both sides are beset by differing types and scales of problems; Bournemouth have lost their opening three games and whilst there is not yet any need to panic, a fourth defeat may set the trend for a difficult campaign.

As for Arsenal, they’ve had a horrible few weeks both on and off the pitch. A league loss at Stoke City was damaging but a 4-0 hammering against Liverpool at Anfield was one of the worst performance in Arsene Wenger’s two decades at the club.

Alex Oxlade-Chamberlain, Kieran Gibbs, Joel Campbell, Gabriel Paulista and Lucas Perez all left the club in the closing week of the transfer window but eyes too will be on those who stayed – notably Alexis Sanchez, who reportedly wanted to join Manchester City.

Twelve goals have flown in during Arsenal’s opening three games of the campaign at both ends while Bournemouth are much better going forward than defensively.

These two games last season produced a total of ten goals, and all indicators point to another high-scoring, chaotic encounter.

However, due to their superior quality and having home advantage, it’s tough to look beyond the Gunners despite their problems.

OFFICIAL: Sead Kolasinac has been voted as the Arsenal Player of the Month for August. pic.twitter.com/rEC7BYyrXz