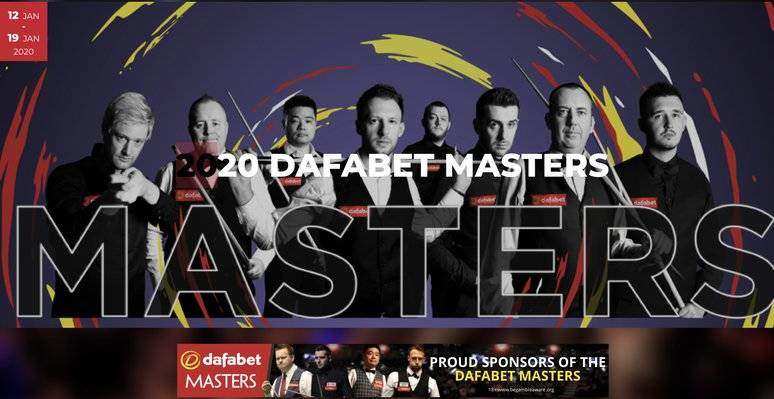 Snooker’s ‘Masters’, sponsored by Dafabet once again in 2020, is always one of the most eagerly anticipated snooker tournaments on the calendar.  The competition was staged for the first time in 1975 and from 1984 onwards it has been restricted to the top-16 players in the world rankings. Scroll on for our Snooker Masters 2020 betting tips and picks…

Ronnie O’Sullivan Set to Miss Out

Remarkably there has only been one back-to-back winner of this competition since Paul Hunter claimed the title in 2001and 2002. That was Ronnie O’Sullivan who landed The Masters in 2016 and 2017. The ‘Rocket’ also won this tournament in 2014, 2009, 2007 and 2005. But, for reasons only known to himself, he has elected to withdraw from the Masters Snooker competition in 2020.

His absence means Judd Trump, the defending champion, is 13/5 (Betfair) for outright glory and he is one of just three players priced at 10/1 or shorter.  Neil Robertson, 9/2 at Ladbrokes) and Mark Selby (7/1 BetVictor) are the others.

The reigning World Champion Judd Trump has been in irresistible form more than a year and since November 2018 he has won the Northern Ireland Open (twice), The World Grand Prix, the International Championship, World Open, and two legs of the hallowed Triple Crown – the 2019 Masters and World Championship.

He has won 44 of the 53 matches he has played this season and while he inexplicably lost a qualifier for the European Masters (5-3) against Ian Burns before Christmas, he has won his next two (preliminary stages of the German Masters).

Neil Robertson Second in Courtesy of the Draw

Given this phenomenal run of form it’s hard to oppose the 30-year-old Judd Trump and its clear Neil Robertson lofty position in the market is due to him being drawn apart from the favourite.

This looks like a competition where you need two full hands to count the players that are playing badly – Stuart Bingham, Barry Hawkins, Mark Williams et-al – or are simply lacking in class. Amongst these you must have Jack Lisowski and Dave Gilbert, who are both yet to win a ranking event, plus Joe Perry who last won a tournament almost five years ago and Ali Carter (last competition win was July 2016).

Contrariwise Shaun Murphy has won a ranking tournament (the China Championship) and made two further finals this campaign and 2018 Masters champion Mark Allen has accumulated six semi-final appearances for just nine notable events he has contested this season.  But, as the Northern Irishman has been beaten in qualifiers for the European and German Masters by seemingly inferior rivals during December he’s not one to place much faith in.

Opening Round a Jack Attack?

Jack Lisowski and Kyren Wilson (20/1 outright, BetVictor) meet in the opening round (Wednesday afternoon) and they have wildly different styles.

Lisowski should be on a high after his final table appearance in the most recent ranking tournament – the Scottish Open – and he has a superior record in the head-to-heads beating Wilson seven times to four.  But he has since lost in qualifiers for the European and German Masters competitions.

It is hard what to make of that and you can see Lisowski storming away with this as easily as him getting pummelled – so going low on the total number of frames line looks a prudent call.  It’s set at 9.5 and you can back the ‘Unders’ at 6/5 with William Hill.