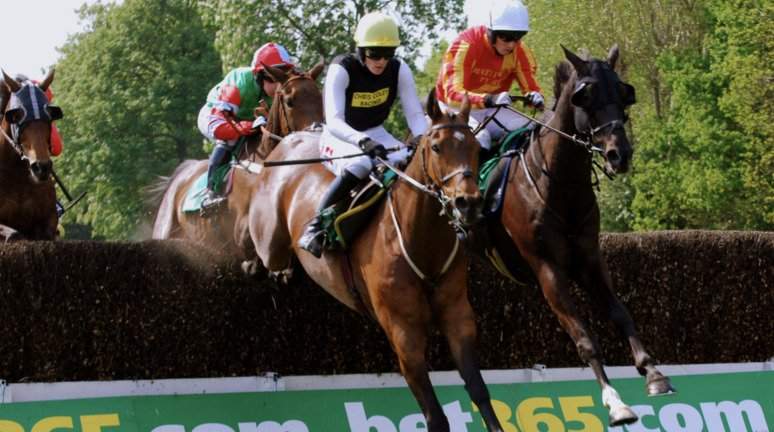 Just one week on from all the history making at Aintree and it was the turn of the Scottish Grand National to be in the limelight at Ayr.

Delayed 24 hours because of the Duke Of Edinburgh’s funeral, the four mile marathon went the way of the Lucinda Russell-trained Mighty Thunder under jockey Tom Scudamore at odds of 8/1, thus keeping the coveted trophy on home soil.

Mighty Thunder was carrying the silks of St Andrews-based Allson Sparkle Ltd, a company run by Colin and Nicola Drysdale, to make the win an altogether Scottish affair.

Lucinda Russell told reporters after the race: “I’m delighted for Mighty, I’m delighted for his owners and I’m delighted for Tom, but I feel so sorry for Blair because he should really be riding him. But he’ll get the ride back on him next season. We’ve got some nice targets for him then, and at least it’s still in the family.
“I’m really pleased for Scotland, it’s nice to have a Scottish winner – Scottish-owned as well.”

Mighty Thunder has been installed as a general 50/1 chance with Unibet for the 2022 Grand National at Aintree.

News came in this week that two of National Hunt’s well known competitors had run their last Rules races in public.

Firstly, the bane of many a spell checker throughout the land – Definitly Red was to call it a day for the Brian Ellison stable. The 12-year-old was last seen running in the world’s most famous steeplechase – the Grand National, but was pulled up.

“Red” won 15 of his 38 career starts with the highlights being taking the Many Clouds Chase at Aintree twice, the Charlie Hall Chase at Wetherby and Cheltenham’s Cotswold Chase.

🗣 “He loved the press and cameras when they visited and was just a gent. He’ll be hard to replace”

The second retirement of the week was that of the Nigel Twiston-Davies-trained Ballyoptic. The 11-year-old refused at the 21st fence in the 2021 Grand National and was retired thereafter by his owners the Mills and Mason Partnership.

Ballyoptic won 9 of his 32 career starts including the Grade 1 Sefton Novices’ Hurdle at Aintree and the 2019 Charlie Hall Chase at Wetherby.

Sunday’s ParisLongchamp card was packed with Group and Listed races on what was French Guineas Trials Day. Here’s a short recap of some of the results and horses that will well be worth following for the remainder of this season.

Last season’s Arc runner-up In Swoop remained a general 25/1 chance for this year’s renewal (Sun 3rd Oct) with most bookmakers after his second place on Sunday.

Racing is in mourning this week. On Sunday we heard the devastating news that amateur jockey Lorna Brooke had passed away following her fall at Taunton earlier this month. After complications she was placed in an induced coma on Friday.

Our thoughts and sympathy are with her family, friends and loved ones at this extremely difficult time.

Amateur jockey Lorna Brooke has sadly and tragically passed away. We can only send our deepest sympathy to her friends and family. And remember the sport we love can be so so tough. #rip pic.twitter.com/bkuZ2Y6TKs

The Injured Jockeys Fund released a statement on Monday which said: “It is with deep sadness that we have to share the tragic news that Lorna Brooke passed away yesterday.

Her family thank everyone for their kindness in the last few weeks, particularly the staff at Southmead Hospital who were so professional. They will be having a private funeral and will hold a celebration of Lorna’s life once Covid restrictions allow.”

Such tragic news about Lorna Brooke. Thoughts are with her family and friends. pic.twitter.com/klcrFbKnfM

‘Horseracing can be a savage enterprise, the line between triumph and tragedy so terribly fine. ‘

🗣️ @leemottershead: remember her joy but be reminded of the dangers as we mourn Lorna Brooke

Coming Up This Week

The 2020/21 jumps season reaches a climax on Saturday when Sandown Park hosts a high-class seven-race card featuring four Graded races, with the feature being the bet365 Gold Cup (formerly the Whitbread for older readers like myself).

My pick against the field is the Paul Nicholls trained Enrilo at 8/1 with bet365*.

My bets for the weekend…

* Betting odds quoted correct at the time of blog publication. Please note that all odds are subject to changes.