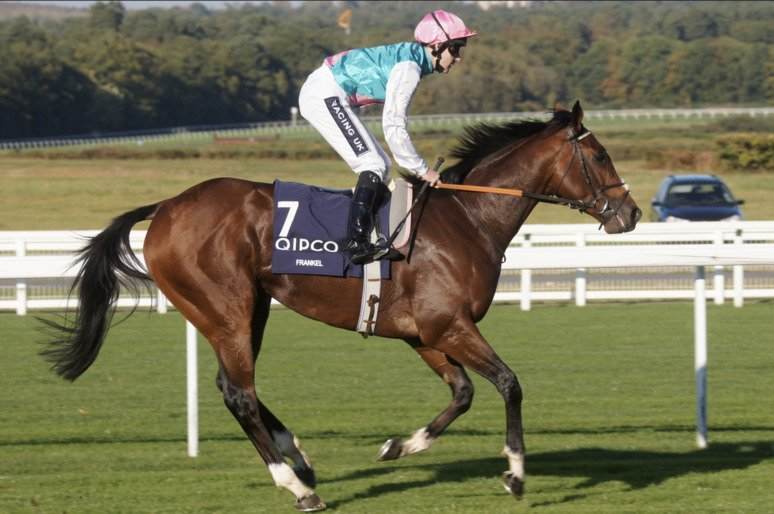 To coincide with the 10th anniversary of Qipco’s sponsorship of the British Champions Series, the first official Hall of Fame for British Flat racing was announced last week. The concept sets out to immortalise the greats of the sport, both equine and human, from 1970 onwards.

The first two inductees were a legendary rider and unbeaten horse – ie Lester Piggott and Frankel.

A spokesperson for the Juddmonte Group where Frankel stands said of the award: “On behalf of Prince Khalid’s family, for Frankel to be the first to be inducted into the Qipco British Champions Series Hall of Fame is testament to Prince Khalid’s passion and vision for the thoroughbred.”

Watch all 14 wins of Frankel here

Lester Piggott was one of the greatest Flat jockeys of all time, having won almost 4,500 races during his riding career, including none other than nine unrivalled victories in the Derby at Epsom.

On receiving his medal Piggott said: “It is an honour to become the first jockey – and the first person – to be inducted into the Qipco British Champions Series Hall of Fame and I am truly delighted to receive this special medal.

I feel fortunate to have spent many brilliant years riding such incredible horses and I’m touched to see my story so well preserved through this initiative. The Hall of Fame is a terrific concept and something that racing has deserved for so many years.”

Further Hall of Famers will be announced in the coming weeks through the usual social media channels.

In what had shades of the Cahervillahow disqualification back in 1991, Sandown’s season ending bet365 Gold Cup was once again embroiled in a controversial final result after yet another spate of bumping and boring after the last fence.

As the racing broadcaster Darren Owen pointed out in an informative tweet, it’s now four times since 1974 that the first past the post in the bet365 Gold Cup (old Whitbread) has been disqualified – Proud Tarquin, Cahervillahow, Givus A Buck and now Enrilo.

That really is bad luck if you’ve been on the wrong side of the stewards’ decision making over the years – punter or owner!

That’s four times since 1974 the first past the post of the Bet 365 ( old Whitbread) Gold Cup has been disqualified. Proud Tarquin, Cahervillahow, Givus A Buck and now Enrilo. #amazinghistory

Fortunately for myself, and for readers of this column last week, the FFP (‘First Past the Post’) Gods came to our rescue, with the sponsors bet365 (as advised in the piece) paying out on the double result. Here’s what I wrote…

“I’m very happy with that 8/1 considering that Paul Nicholls’ charge was heavily punted into the 7/2 favourite. We were rather fortunate to get two bites of the cherry however.”

Christian Williams’ Kitty’s Light was coming with a withering run after the final fence and was making ground hoof over hock on Enrilo, only to be stopped in his tracks by the swerving leader.

Over on the far side, Alan King’s 12/1 chance Potterman, was beaten three-quarters of a length with another short head back to Kitty’s Light in third.

Because the stewarding rules stipulate that the disqualified horse has to be placed behind the one it interferes with, Potterman (somewhat farcically) was awarded the race with Kitty’s Light second and Enrilo only third.

Coming Up This Week

The first two Classics of the season are upon us once more as the youngsters battle it out for supremacy in the 2000 & 1000 Guineas next weekend at Newmarket.

In the 2000 Guineas on Saturday my preference goes to the Aidan O’Brien-trained St Mark’s Basilica (13/2 at William Hill) who won a very significant pointer to this race last season, by taking the Dewhurst Stakes.

The fillies’ Classic on Sunday is ultra-competitive affair too but my 1000 Guineas pick this season goes to Aidan O’Brien’s Santa Barbara (13/8 at Betway Sports) who is reported to be burning up the gallops at home.

* Horse racing odds correct at the time of writing. All odds are subject to change.