Poker: Ireland’s Last Chance to Star on an International Sporting Stage in 2019 …and they’re the favourites! 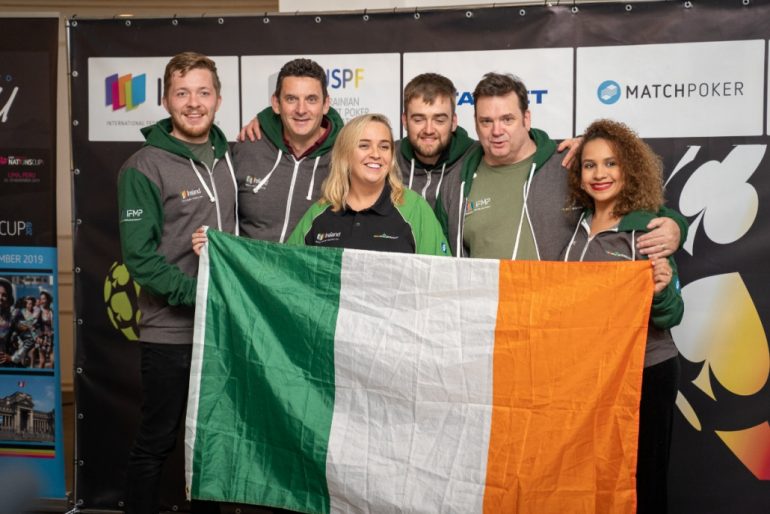 All is not lost on an International Sporting Stage as Ireland are on their way to Peru!

Ireland’s Rugby team may have failed to land a telling blow in the World Cup, but they fared better than the Irish Cricket team who failed to qualify for their World Cup.  Likewise the Irish Woman’s Soccer team watched the action from home on the TV.

We missed in the World Cup of Darts, failed to turn up in the World Cup of Pool, got sunk in the Wold Cup of Snooker and are out of the Davis Cup before it has begun.  There was a joint-second for the Irish Show Jumping Team on home soil at the Longines FEI Nations Cup (for the Aga Khan trophy) at the RDS but that trophy now resides in Mexico.  So, in qualifying for the Tokyo Olympics Ireland’s Woman’s Hockey Team will seek to give Ireland some much needed International silverware in 2020.

But don’t write-off 2019 just yet… Ireland have one more chance at International sporting glory in a World Cup competition where, as double Nations Cup champions and recent European Championship runners-up, they will enter the arena as favourites.  And the sport is… Poker!

Yes, poker which is officially a sport and a skill game, read on…

The International Federation of Match Poker (IFMP), which was founded in Lausanne, Switzerland in April 2009, is structured as an International Sports Federation and in such is recognized by the Court of Arbitration for Sport.  Securing provisional membership of the International Mind Sports Association (IMSA) in 2010, the goal of the IFMP is to promote the development of Match Poker worldwide and to secure its “recognition as a ‘mind sport’ based on strategic skill, played without any discrimination of race, sex and creed.”

The IFMP currently has 60 national member federations and its president, Patrick Nally, is often referred to as the “Founding Father of Sports Marketing”.  His impressive track record began in the 70’s when he was instrumental in rewriting and restructuring the event format and commercial marketing rights of the Olympic Games and FIFA World Cup.

This poker variant conforms to the Global Association of International Sports Federations (GAISF) standards and is approved by that organisation.  Their definition of a sport is as: “Not relying on any element of luck specifically integrated into the sport”. Part of this process is the introduction of WADA (World Anti-Doping Agency) testing at all events.

With no gambling or financial gain the ‘mind sport’ which is the IFMP has no restrictions on age – akin to chess it can be played by all ages and sexes.  In fact, team Ireland has two women players on their squad.

The Road to Peru

And that team, who confirmed their status a world leader by establishing themselves as the most successful team in the history of Match Poker competition when taking a silver medal at the recent European finals in Kiev, Ukraine, are now headed to Lima, Peru, to carry the tricolour into battle at the IFMP World Cup finals

“For a country with such a strong history of card playing and such an impressive reputation the world over for individual Irish player achievements, official recognition has being strongly lacking,” says Ireland’s Team Captain, Fintan Gavin.  “Hopefully Ireland’s qualification for the Match Poker World Championship in Peru will see the tide finally turn.”

“The IFMP’s unique format has been so well received globally, commonly described as a ‘mind sport in an eSports wrapper’ its unique format does not preclude it from mainstream media attention who normally shirk poker as being a ‘gambling game’ and not suitable for a young audience.  There are no ‘buy-ins’, there is no gambling involved, we play for pride while the governing body has a mission statement to promote poker as a ‘skill sport’.”

“To that end the event receives massive attention with politicians and dignitaries at opening parties and closing ceremonies.  Furthermore there is a potential global viewing audience of 200 million courtesy of the action being televised. It’s a proper endorsement.”

Team Ireland, who are currently seeking a sponsor to finance their quest for gold, were one of the first teams to qualify for the word finals along with Ukraine, Spain, Belarus, Germany and Poland.  But there will be 16 teams at the World Finals in Peru. Asia’s qualifiers are currently ongoing in Taiwan where it looks like India, Japan, Singapore and Korea will qualify from that group. The America’s qualifying group will be played out at the end of November with Brazil expected to be the table-toppers.