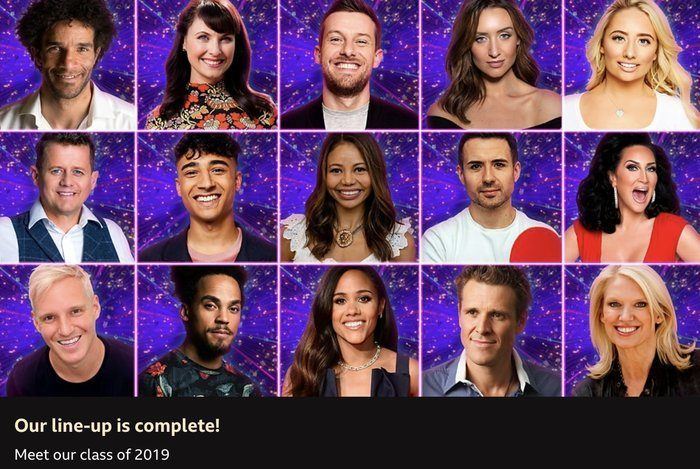 Strictly Come Dancing returns to our TV screens next month (September 2019). Last year between nine and 13 million people watched every episode of this BBC 1 show meaning the 2019 series is eagerly awaited by both fans and the Strictly bookmakers who are keen to accommodate this enormous viewership. In this article we will dissect this year’s contestants as we look for some good Strictly Come Dancing 2019 betting tips to hopefully make some profit for Xmas.

The bookies offer betting markets on everything from the outright competition winner to the next elimination, the first couple to receive a ‘perfect 10’ (which happened in week 5 of last year’s show) through to a ‘to make the final’ option.

Runners and Riders – Who is going on Strictly 2019?

On 31st July the first three participating celebrities were announced with new names drip-fed to the public until the full line-up of 15 contestants was revealed late last week. Below you will find the full list of contestants along with their best Strictly Come Dancing 2019 betting odds…

But instead of cutting straight to the chase with outright winner prices, the first thing that we should have listed alongside contestant’s names is their ages. Because, when trying to identify the winner of this annual event it is helpful to know there has only been one winner aged under-25 and just two previous champions were over 35.  The previous winners were:

The BBC’s Strictly viewers may not be sexist but they are clearly ageist! So where does that mean you should place your Strictly bets for 2019?

Removing these two contestants from the fray should turn this into a winning book as they are trading at just 8/1 apiece. But if the age theory does come into play once again, there are only a few to consider. They are:

And a fascinating contestant, 31-year-old Will Bayley who is a world No. 1 ranked Paralympic table tennis player. Bayley was born with arthrogryposis which affects all four of his limbs. Just how will his disability work out for him in a dance show dependant on public votes?

Make no mistake, this competition may be labelled as a talent show but it is really a popularity contest and turning to social media is a good barometer for a contestant’s potential success. Form-lines here will direct you straight to Made In Chelsea star Jamie Laing who has over 875,000 Twitter followers. Saffron Barker has 520,000+ and the early favourite, Alex Scott, has almost 225,000 Twitter disciples.

Scott is a popular choice with the Strictly Come Dancing bookmakers having made 140 appearances for the England Womens’ national football team. She also appeared as a pundit during the 2019 FIFA Women’s World Cup, has a Super Sunday spot on Sky Sports (making her the first female pundit on the channel) and she won the Bear Grylls’ ITV show Mission Survive

But the audience of those shows is surely very different to the average Strictly Come Dancing viewer and it would be no surprise if the betting public were to harbour more affection for other candidates after the first episode is broadcast in September.

Actress Catherine Tyldesley might be a better fit. She is well-known to the mainstream TV audience for her seven year role in Coronation Street and the BBC faithful will know her for parts in Holby, Two Pints of Lager and a Packet of Crisps, Sorted and Florence Nightingale. She has also starred in a new six-part BBC comedy show called Scarborough which is rumoured to air this side of Christmas on BBC – how convenient is that?

OK, she may soon turn 36, but Tyldesley doesn’t look a day over 34, and with 422,000 Twitter followers banked she is sure to have plenty of support in their Strictly Come Dancing 2019 betting markets.